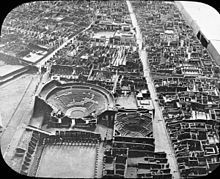 The theatre area of Pompeii is located in the southwest region of the city. There are three main buildings that make up this area: the Large Theatre, the Odeon (small theatre), and the Quadriporticus. This served as an entertainment and meeting center of the city.[1] Pompeii had two stone theatres of its own nearly two decades before the first permanent stone theatre was erected in Rome in the 50s BCE. Most of the theatres were adapted for gladiatorial performances during the reign of the Roman